If you are looking for the best GoPro camera for your next adventure, you have come to the right place. To offer you this ranking of the best action cameras on the market in 2021, we have tested all the latest models from GoPro for shooting at 360 degrees.

This type of camcorder is the ideal companion if you travel or play sports and want to shoot your exploits. They do not have the quality of a DSLR or mirrorless. But they are more rugged, waterproof, and practical, allowing you to take them to places your smartphone or compact cameras wouldn’t like at all.

The compact size and dramatic framing have become popular with extreme sports enthusiasts, who resume their adventures by mounting the cameras on themselves or their equipment. They are also used by TV crews when it is not possible to use a normal camera. Thanks to a wide range of accessories, they can also be attached to helmets, surfboards, cars, and more. 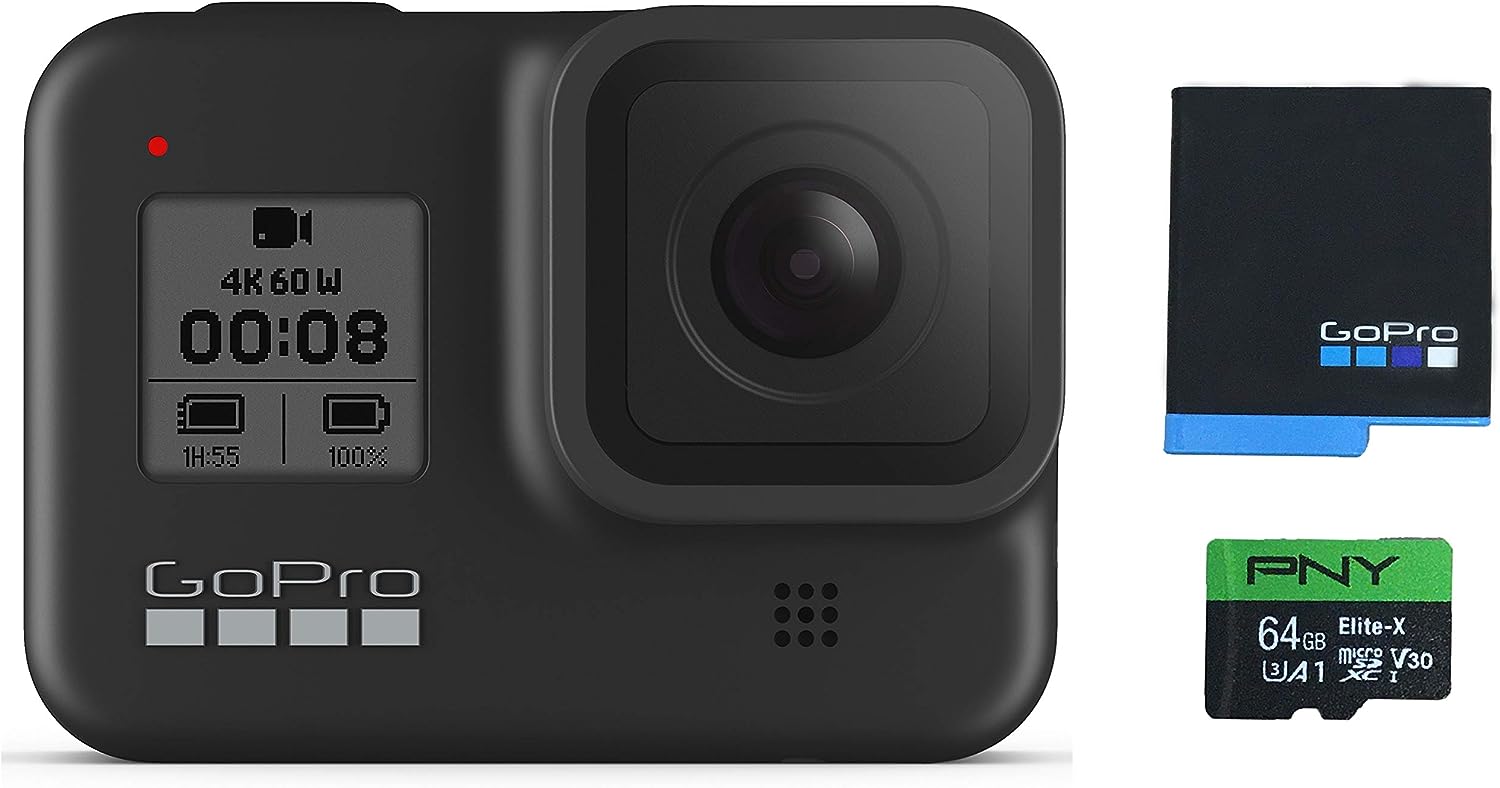 GoPro Hero 8 Black is easy to use, has many additional features, and boasts the best image stabilization technology available today. It clearly distinguishes itself from the Hero 7 with even more advanced technology. There is also the possibility of making livestream videos where you can share your adventures with the rest of the world directly on Facebook.

GoPro has also tweaked its app, making it easier to edit and share video clips. Now, the camera is also easier to mount on a tripod, thanks to the folding fingers on the bottom of the frame.

It is a well-thought-out action camera that can satisfy both professionals and beginners.

The new functions of the GoPro Hero 9 Action Camera do not offer enough advantages to justify the price compared to the predecessor. The two most significant upgrades are the new sensor and the front display.

The 23.6MP sensor can shoot slightly more detailed 5K video than the Hero 8 if conditions permit. However, the chief advantage lies in electronic stabilization. Here, the Hero 9 can apply HyperSmooth Boost technology to all shooting modes.

The technology makes this action camera powerful and suitable for people who want to shoot high quality 4K and 5K videos. Some minor interface and exposure issues have been encountered, but a new firmware version has already come out that should fix them. At the moment, we have yet to test a Hero 9 equipped with this update. 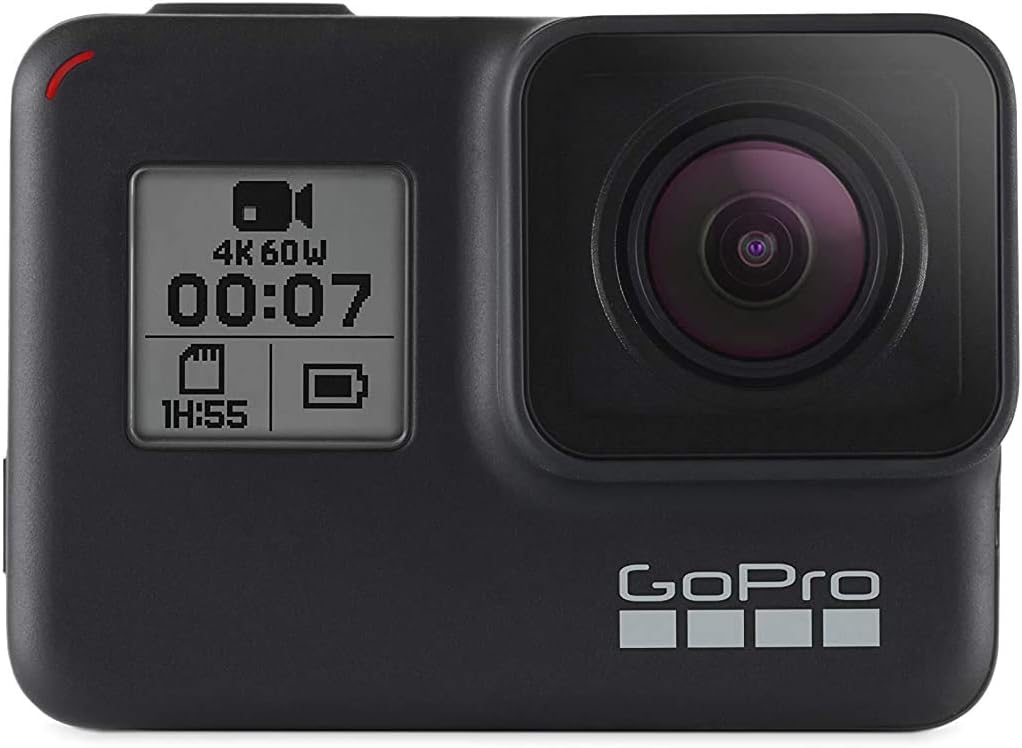 The Hero 7 has the same video specifications as the Hero 6 but offers several improvements. The most significant is the new HyperSmooth stabilization. It is cool that I can create videos that look like they come with the gimbal.

Also, a new update is the TimeWarp videos that combine the idea of traditional time lapses with the HyperSmooth function. It is essentially a stabilized time-lapse. GoPro has revised the GUI for a better experience.

The Hero 7 camera can create a sharp and smooth 4K video. It is one of the best action cameras you can buy today. 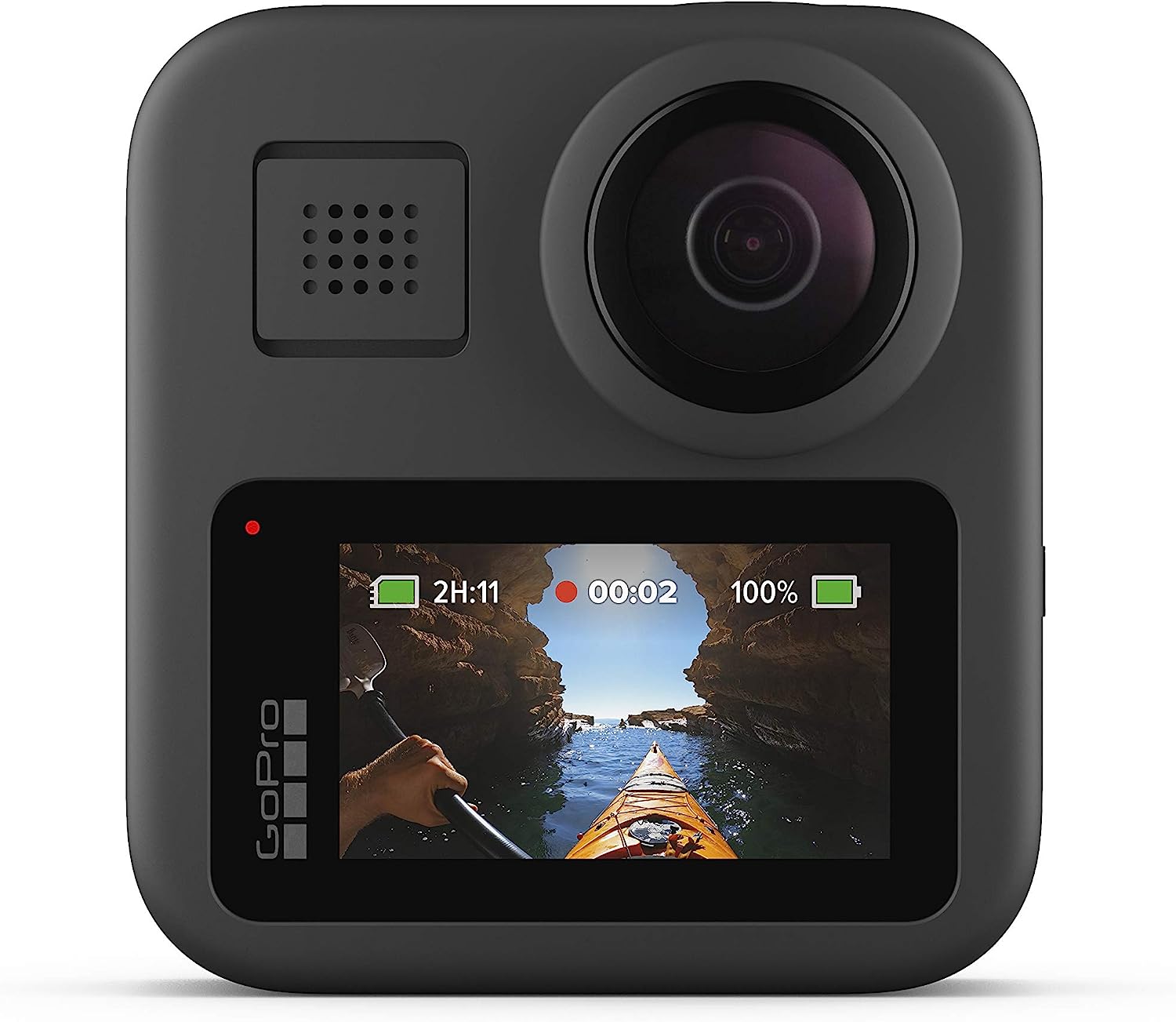 If you want to shoot only traditional type movies in the best possible quality, functions produced by GoPro Hero 8 are certainly the best. However, if you want to process your videos after we shoot them and are looking for exceptional audio quality, then GoPro Max is worth considering.

It is GoPro’s most expensive action camera that uses two fisheye lenses to shoot spherical 5.6K video. You can crop the footage to make a standard 2D video, using the supplied OverCapture software.

As in the Hero 8, there is a wonderful presence of features including six-mic audio. It records excellent audio but does not quite live up to GoPro’s promises. TimeWarp shooting functionality and fingers built-in mounting hardware ensures that you will not need any extra mounting accessories.

The downsides are the 2D video quality that is not comparable because of the need to convert starting from a fisheye image and the maximum resolution of only 1440 / 60p, especially in low-light situations.

MAX version remains the best waterproof 360-degree action camera around, at least until we give our final verdict on the promising Insta360 One R. 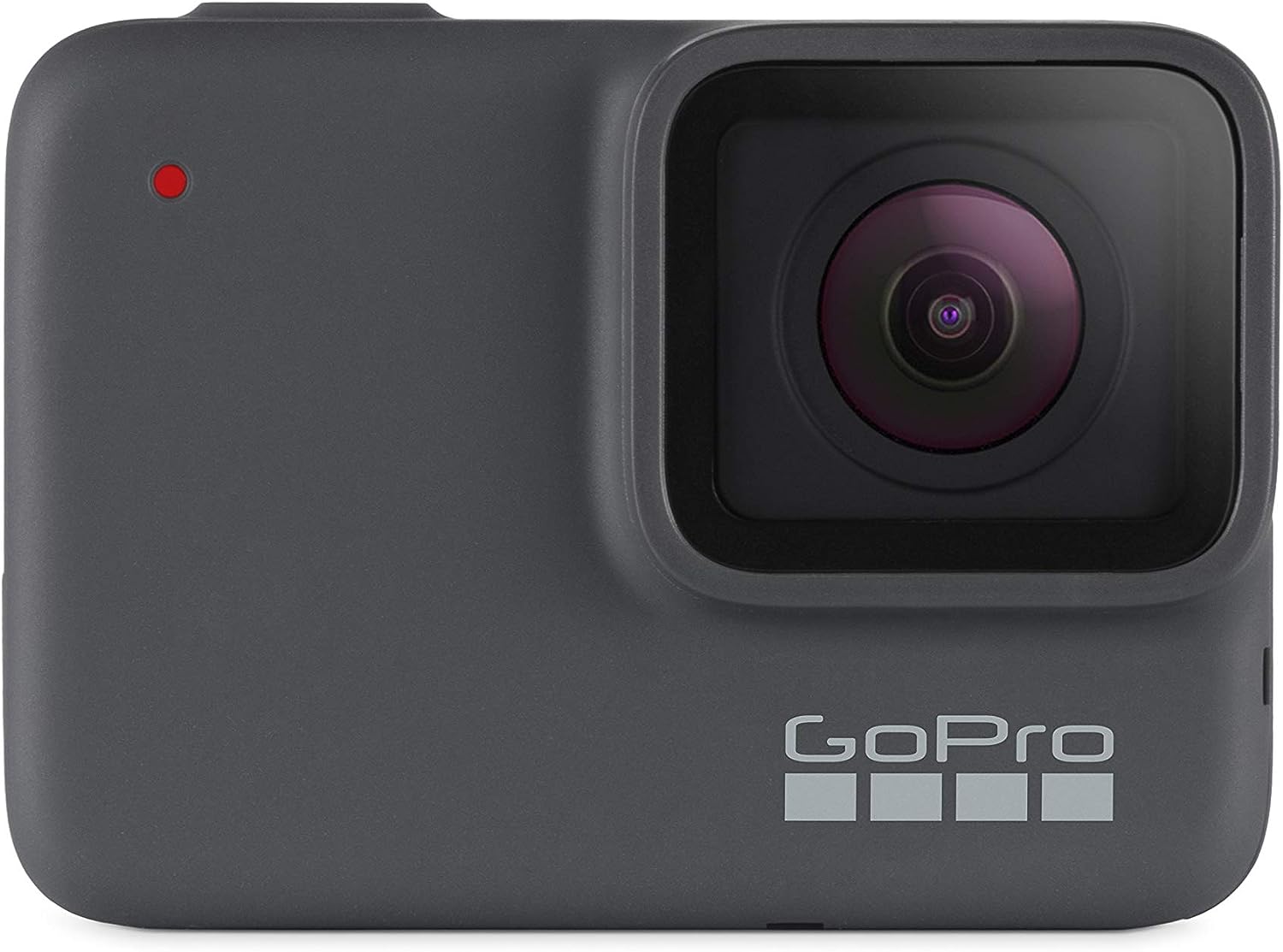 GoPro Hero7 Silver is the lower hierarchical model to the Hero 7 Black model. It does not have all the features and capabilities of its older sister but has a better quality/price ratio.

This model can still shoot stabilized 4K videos. It has water resistance up to 10 meters, a 2-inch touchscreen, and comes with voice controls. With these features, you can give the GoPro any type of command without even touching it.

It is a wonderful choice for sports or for those who use it occasionally. 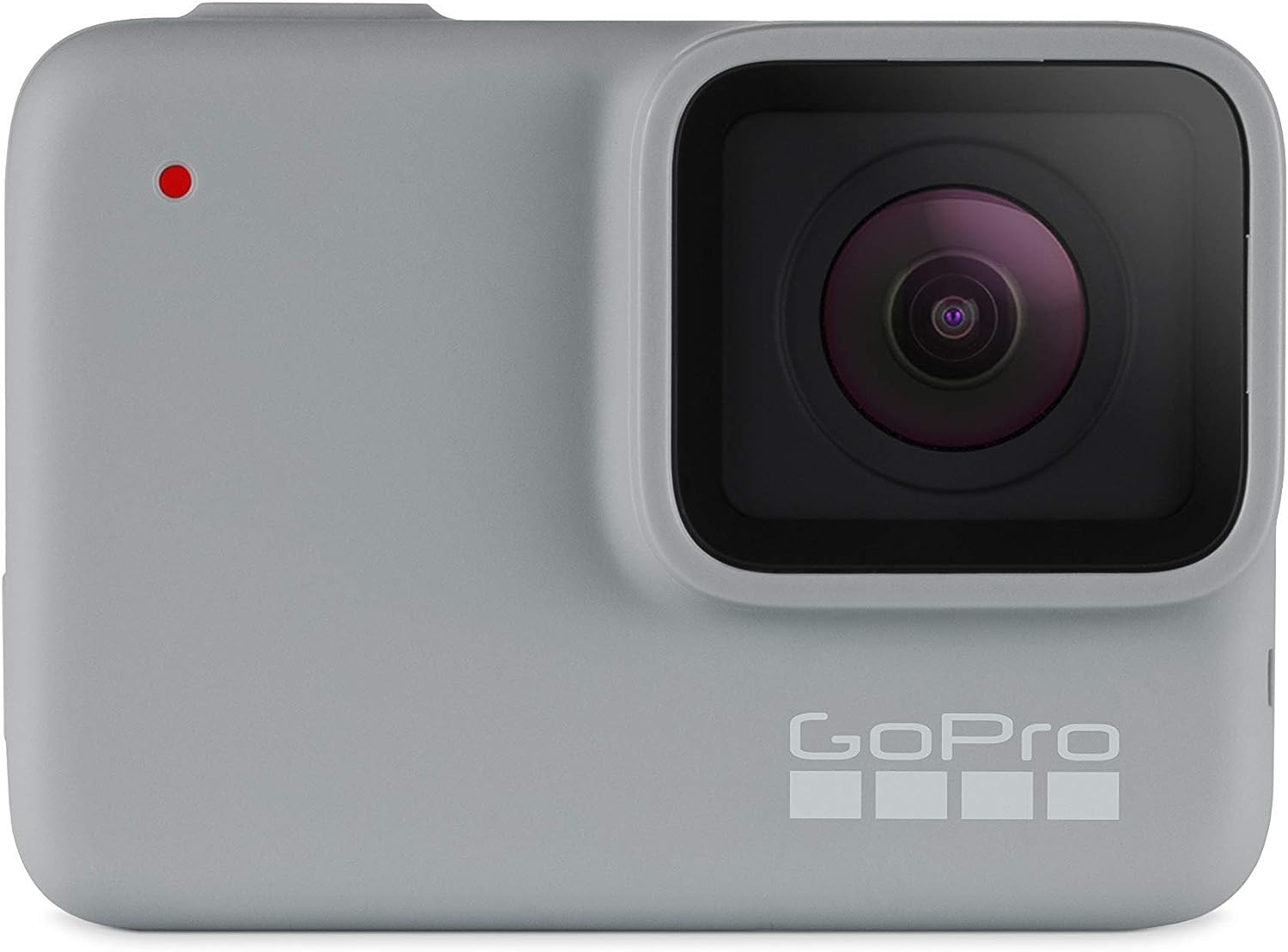 If you are looking for a waterproof and rugged helmet camera that can shoot outstanding quality 1080p video, the Hero 7 White is a great option. It has been out of production only a year after its arrival.

The availability is excellent, and the price is affordable. It is worth considering if you do not need GoPro’s more advanced modes, like TimeWarp or slow motions. It cannot also shoot a 4K video. The appearance of the video is the classic GoPro fisheye because it is not possible to change the field of view of the camera.

Beyond these hurdles, what remains is an ideal 1080p video quality with an impressive dynamic range and details that put it on the same level as the Hero 7 Silver. Audio quality is also decent.

Its simplicity is also a strong point, as it uses simplified software settings compared to the following models and takes less time to set up. 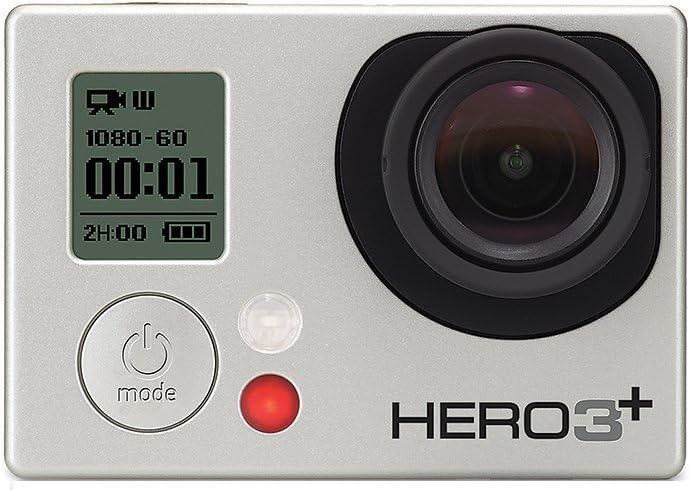 The cheapest GoPro you can buy right now is the renewed GoPro Hero 3 with low-end technical features. It uses a 10 MP sensor that can record in Full HD at 60 frames per second underwater. However, the possibility of slow-motion is not high.

It has a single two-inch display, touch-screen, and good stabilization. Among the connectivity solutions, we have Wi-Fi and Bluetooth. And there is the possibility of pairing with an iOS / Android smartphone or tablet.

There are also voice commands. Among the limitations, we cannot perform live streaming and the lack of a GPS module. 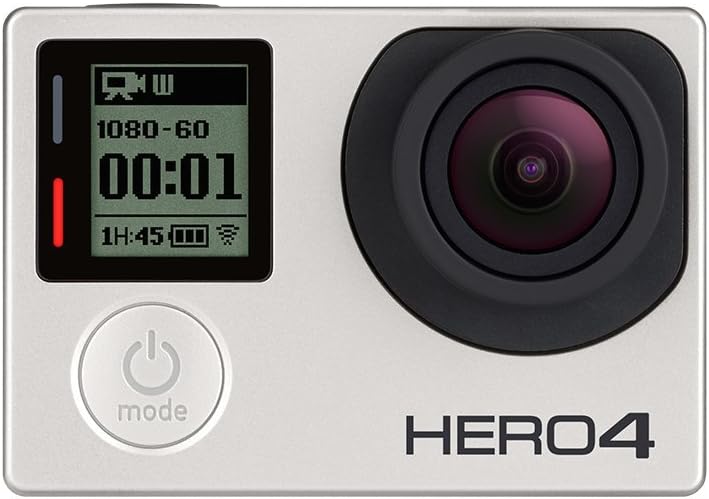 The GoPro Hero 7 is the current midrange solution from the famous action-camera manufacturer. It uses a 10MP sensor capable of recording in 4K Ultra HD at 30 frames per second.

It has no second display and can be used underwater at depths of 10 meters. Unlike the top-of-the-range model, it has only one 2-inch touch-screen display. Video stabilization is good but not as excellent as the high-end model. And there is no lack of voice controls, GPS, and two microphones for audio recordings.

GoPro Hero 4 Action Camera is one of the best cameras for cycling and fast movements. 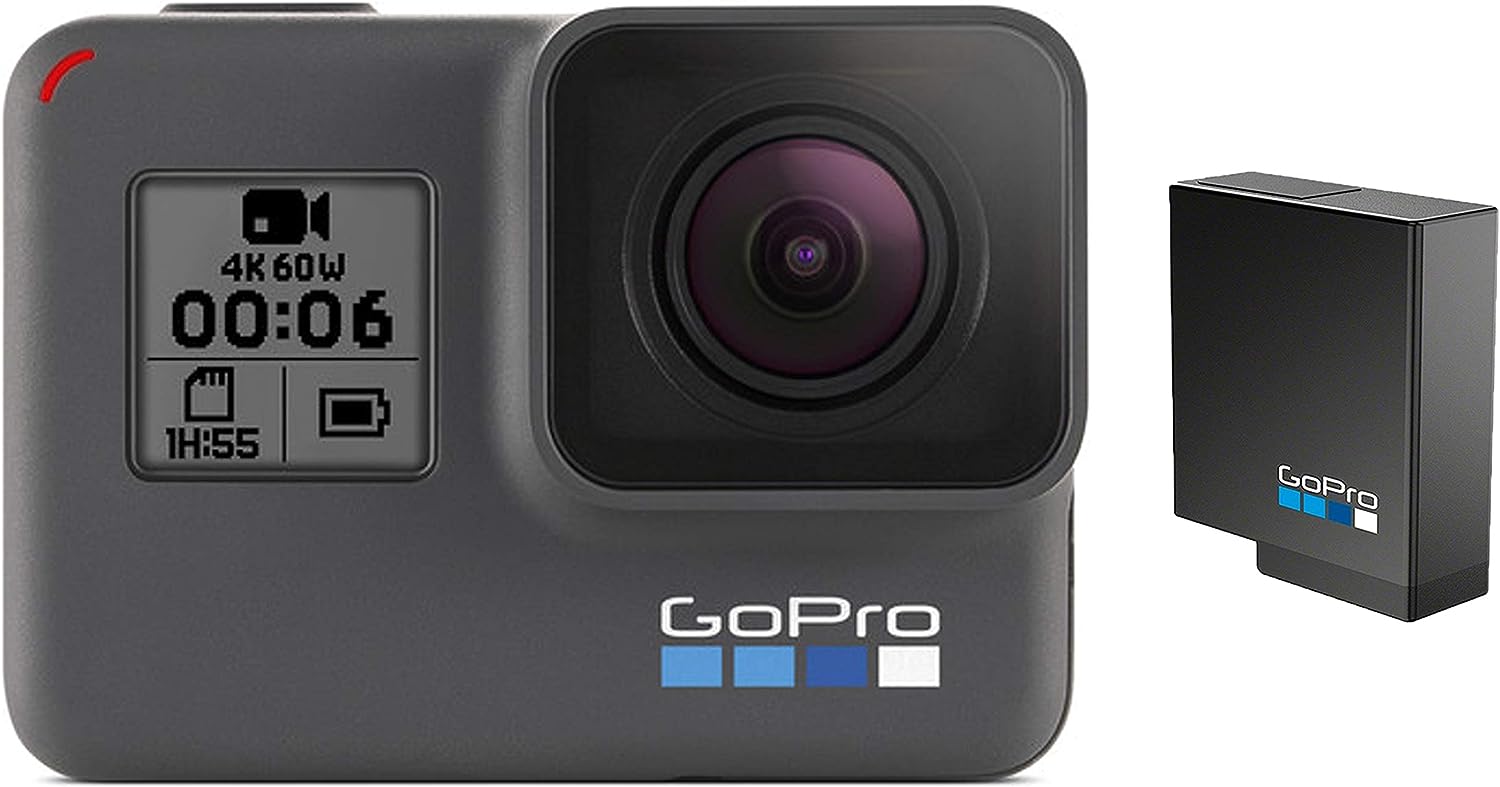 The GoPro Hero 6 uses a 2-inch touch-screen display paired with a second display on the front. The camera comes with a waterproof design up to 10 meters and integrated video stabilization. It supports 4K Ultra HD video at 30 frames per second and Full HD at a maximum of 120 fps.

The unit can capture photos at a resolution of 12 MP. The built-in microphone records two channels in stereo mode.

The GoPro Hero 6 was one of the undisputed queens of the category when it debuted on the market. It still makes some sense to the affordable price you can find it at.

Features to Consider When Choosing a GoPro Camera

The first technical feature to consider when buying the best GoPro camera is certainly the maximum resolution supported by the sensor. It usually gives image quality by three components: sensor, lens, and image processor. It is the first that establishes the resolution as the number of pixels that contain every single frame of the videos recorded with the device.

There are still other essential features in an action camera, such as waterproofing. We have said that action cameras are video cameras to be used anytime, anywhere, and anyway. And it also means in the presence of water, at the sea, near rivers, and even underwater.

Many models offer resistance to liquids and dust without the use of accessories. But there are many cases on the market that allow you to take any action camera even to depths of tens of meters below the surface level.

Imagine you want to use an action camera attached to your helmet while riding a mountain bike on a dirt track, or if you want to hook it to the frame of your car. In these cases, good stabilization technology is necessary if you want to get a truly enjoyable video. Of course, you can always intervene in post-production. But the results of an on-board stabilization are unattainable via software.

With a GPS module, it is possible to insert location information within the metadata of photos and videos.

Wi-Fi and Bluetooth are the technologies that allow you to transfer the videos recorded with the action camera to external devices. In some models, they also allow pairing with PCs, smartphones, and tablets. So, it is possible to manage the action camera settings in a simplified way, using a large display to decide the best shot.

What is the best GoPro camera to buy?

The GoPro Hero 8 Black costs very little and also has a waterproof case in the official equipment. It allows you to record videos up to Full HD resolution at 30 fps and can even reach marine depths of 30 meters.

Are GoPro cameras worth it?

The GoPro cameras are affordable with outstanding functions. They have advanced video stabilization and the ability to capture photos in RAW and HDR modes.

The display remains 2 inches with a touch-screen, while the body is robust and waterproof as usual up to a maximum of 10 meters even without the use of external cases. It integrates 60 fps at 4K resolution and 240 fps even in Full HD.

If you need a compact GoPro camcorder to take anywhere, it is the category you need to turn to. Some inexpensive models deliver great image quality and support for the latest technologies such as GoPro Hero 8 Black and 9 models. But let’s get to the proper action. With all the tips we provided, you will choose the best GoPro camera for your pocket and your needs.